Communication Is the Key in Spain

Hello! My name is Nadezhda Milkova. I am from Varna, Bulgaria. I was chosen to go to Santpedor, Catalonia, during our Erasmus + school project ,,Communication is the key”. It was my first trip abroad without my parents. I liked Santpedor very much because I saw many interesting things there. I loved Catalonian people-they are very warm hearted and friendly.

I have made too many friends there : Nuria, Julia, Adrian, Alex , Caterina , Jana, Sonia, Tomas. Catalonian school was much more different than ours. My teachers, my host family I went to a park near the town. There we had a great time-we talked and laughed all the time. We also went to Manresa and Barcelona where I bought some nice souvenirs for my family and friends. In Barcelona I saw the best stadium I have ever seen-Camp Nou. It is gorgeous. 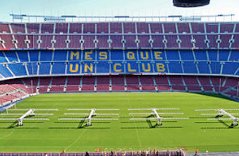 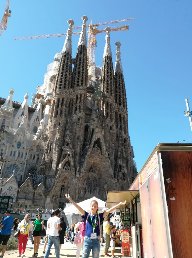 Sagrada Familia is also the place I won`t forget.

Now I know that I have friends even so far away from Bulgaria!

So much happiness! So many memories!

A Visit in Spain

Hi, my name is Ababei Andreea Denisa, I am a student in 8th grade from Romania, near the city Iasi. I am thirteen years old.

On the first day when we arrived in Santpedor I met the entire family who hosted me.

The next day I visited the school and participated to activities with the other children from the Erasmus project. Then we went to Ampans, an association that helped persons with a handicap to integrate in society. They had a greenhouse with many flowers and food for animals. There was a very nice girl who taught us how to make flower bouquets, it was great fun. 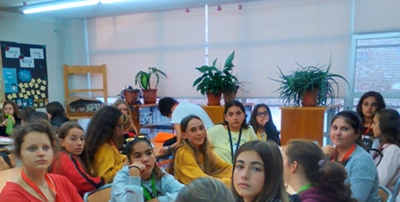 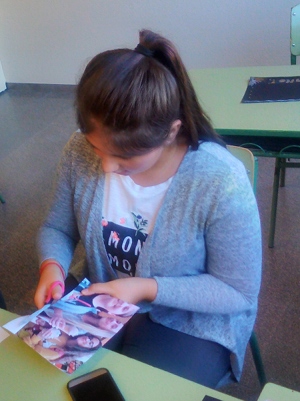 The following day we did sports activities and many games with many objects. On Friday we made frames for photographs and in the evening I went to Manresa with the host family, to see a festival and then we went to a concert, it was an unforgettable day.

On Saturday we went to Barcelona with the teachers. I with Dragos and the teacher Chrys, we went on the Ferrys wheel and then we visited the Sagrada Familia cathedral which has been under construction for many years, it was very beautiful. 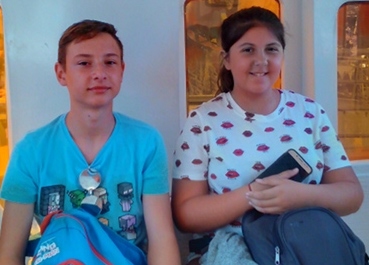 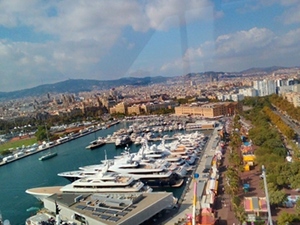 I will never forget that week.

Communication Is the Key - Mobility

Hello! My name is Cristian, I`m from Iași, Romania and I`m fourteen years old! I went on a school exchange program made possible by Erasmus+, in October. I went to Spain, to a school in Santpedor, that was the most beautiful school I`ve ever been to! It was so big and so well equipped, they had projectors in every classroom, that's a rarity in my school!

On Wednesday we went to a foundation for handicapped people named AMPANS, then went to a park where we did some relaxing activities and then we, the kids, went to Manresa to see the city and serve an ice-cream and a bit of chit-chat. Thursday we did a workshop on emotions, we went to an auditorium and played some games based on emotions. We then did some outdoor activities on the playground. After we got home, I went with the family I stayed at to Montserrat for a hike around the mountain, I can tell you, that`s the most beautiful mountain I`ve ever seen!

On Friday we decorated the school`s stairs with some saying from our countries and then went to visit Santpedor`s city hall, where we met the major. We then got back to the school and did some activities that included playing a game on our phones, named Kahoot. After all the activities we`re done we went to a park and talked, played and laughed for the last time, before we would leave. We went on Saturday to visit Barcelona with our teachers, we went to the beach, and then we visited La Sagrada Familia. 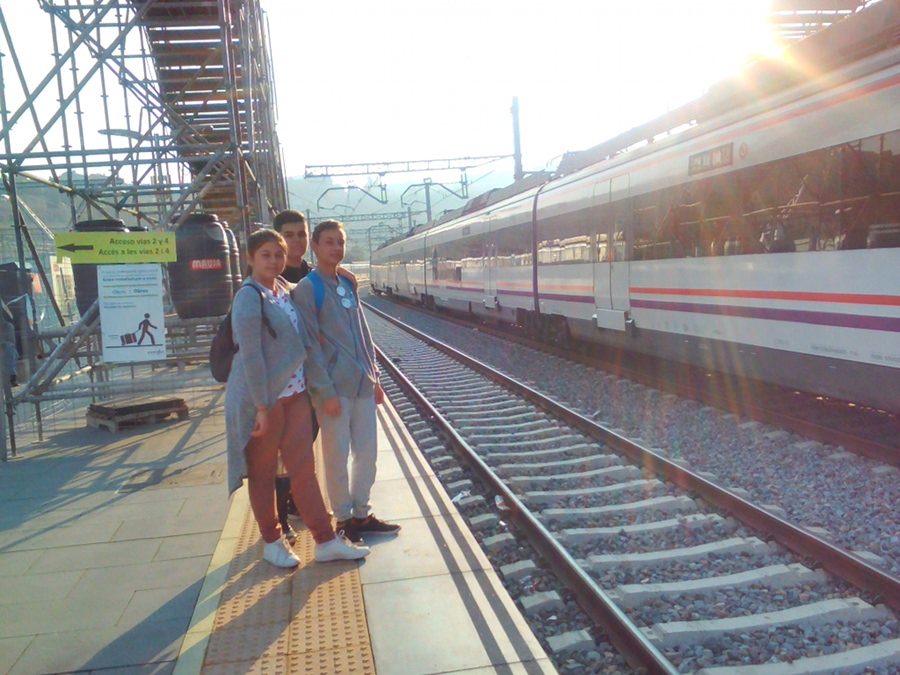 On Sunday, at 11 o`clock we took off from Barcelona and landed at 14 o`clock in Iași, Romania.

When we arrived in Barcelona, it was beautiful: tall palm trees, beautiful landscapes, everything. We took a taxi and it left us at Hotel Ramon. There were our partners who would host us one week. We also met a teacher called Carme and she was verry happy to see us. My partener’s name was Marc and he also was happy to see me, we met other kids. When we arrived at Marc’s there was his family, and we had dinner.

The next day we went to school and saw a short movie called “The butterfly circus” it was about a circus who finds a limbless man who can’t move, at the end that man becomes a celebrity. We went to an association called “Ampans”. It was about people with handicap and help them to have a job, to be someone. We went separate groups, one it was the school and the second one was the garden shop. I was going to the garden.

We arrived at the garden and it was beautiful, me and my theacher were smelling candles. We went to big table and was a woman called Rosa, a botanist. She taught us how to make a beautifull bouquet and to look stunning. 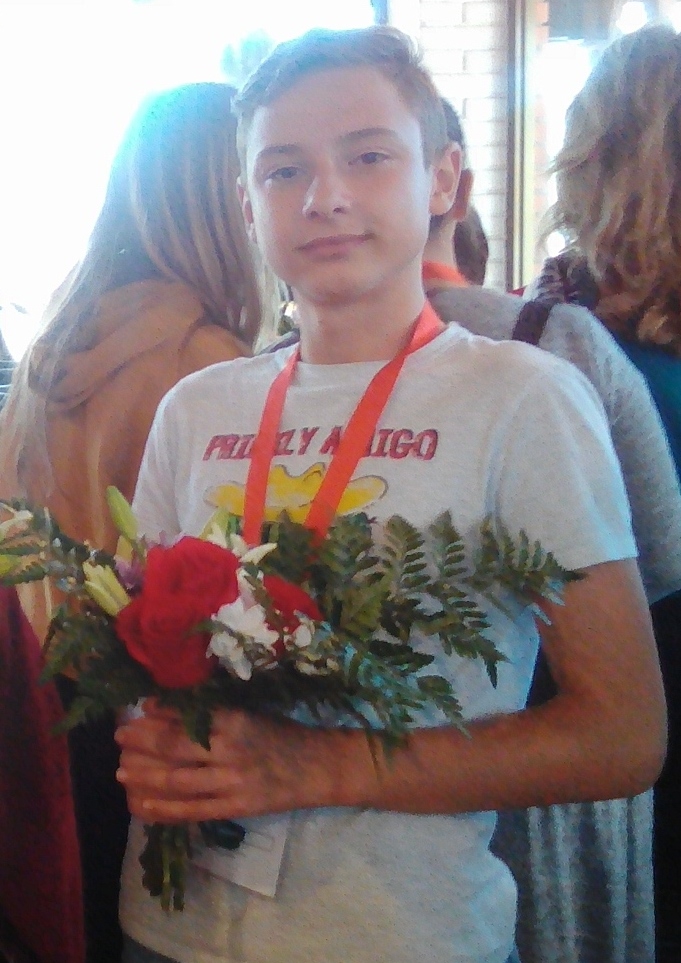 Once we finished the activity we went to a park and talked about what was our experience about this activity. When the activity ended we went home, eating and went to Manresa.

The next day we did activity at the playground and a guy showed us how to play with juggling balls, hula hoop and Diablo (i don’t know how is it called ). The next day it was a little hard because we had to say goodbye to the students from other countries. We did an activity playing a game called Kahoot and it was fun. 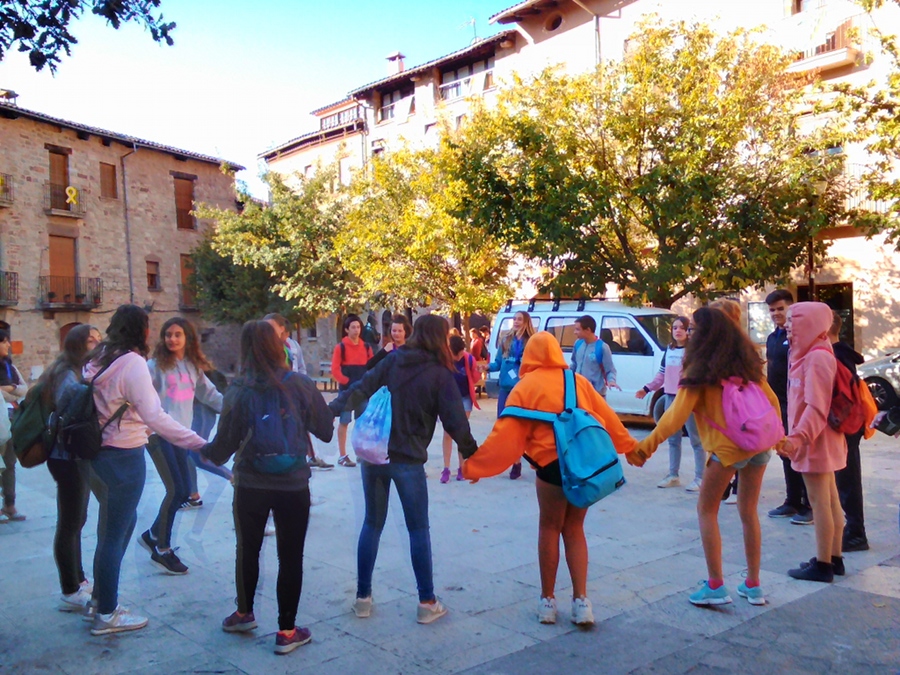 I will allways remember everything from Spain and I’m still talking with them on social media .

My Experience with Erasmus+ in Spain 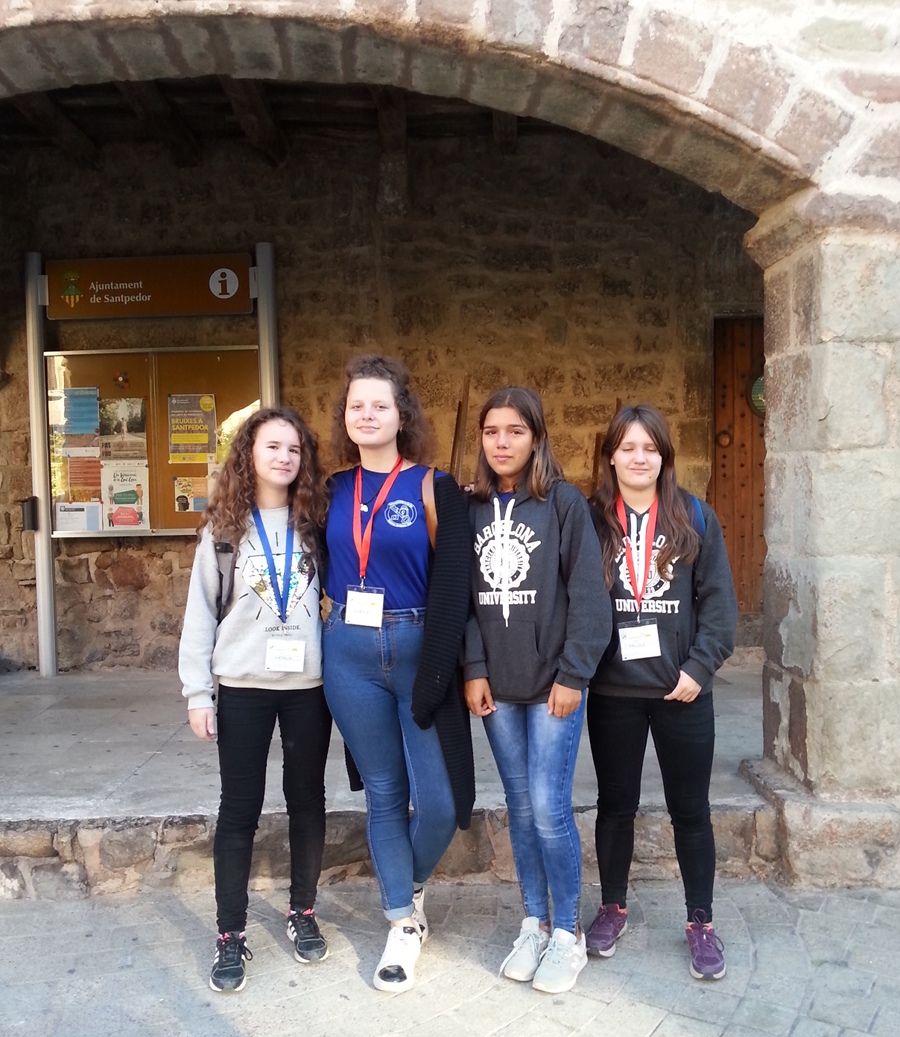 I lived with Laura Pineyro Prat. She is very funny and nice. Laura is 13 years old. so she's older than me, but we got along very well. I loved Laura’s cat – Mia, she is very beautiful, and crazy, funny cat!

At school, I met a girl, from Erasmus project as well. She was very nice and most of the time I spent with her. Her name is Miracle. Bruna was one of the most nice mates and my cousin lived with her. Besides of the classes at school, one day with the entire Erasmus group, we visited the stadium in Barcelona. The stadium is very, very big and famous all over the world!!!

Every day abroad was full of experiences. I got to know the culture, I thought it looked different! I have tasted various dishes.

This trip taught me a lot of things. I met there a lot of cool people, I miss some of them today. 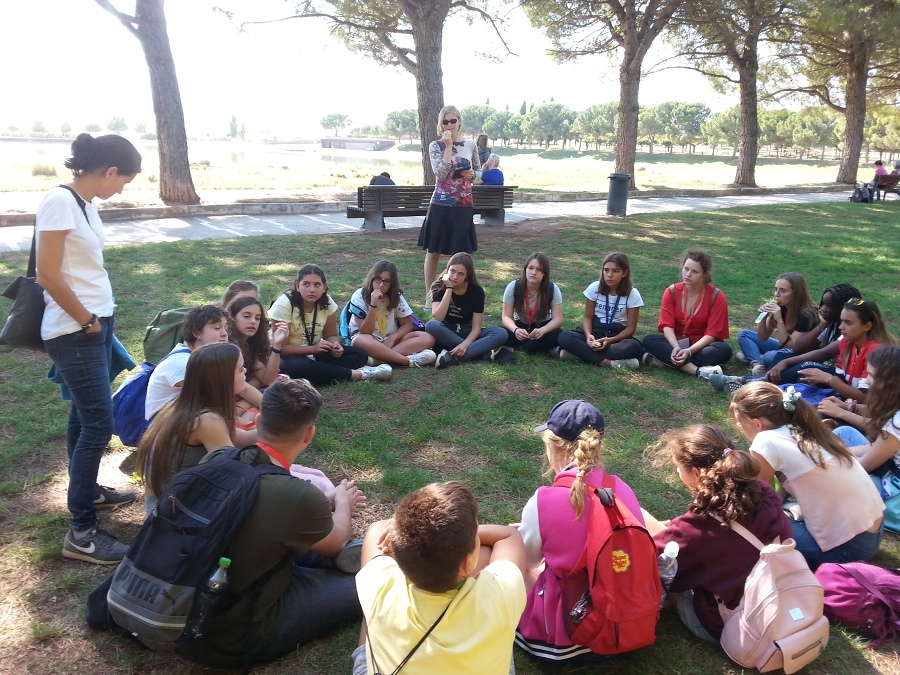 I would be happy to participate in such an adventure again.

So now I’m waiting to host someone from Erasmus +.

In October me and my friends were on Erasmus+ project "Communication Is the Key" in Spain. We lived in Santpedor, a small town in Catalonia. I met a lot of people from other countries. For me the best place we visited was Barcelona. It's a very beautiful city. We were in FCB stadium, (it's so big!) in Sagrada Familia, in a shopping centre and on a walk by the city. 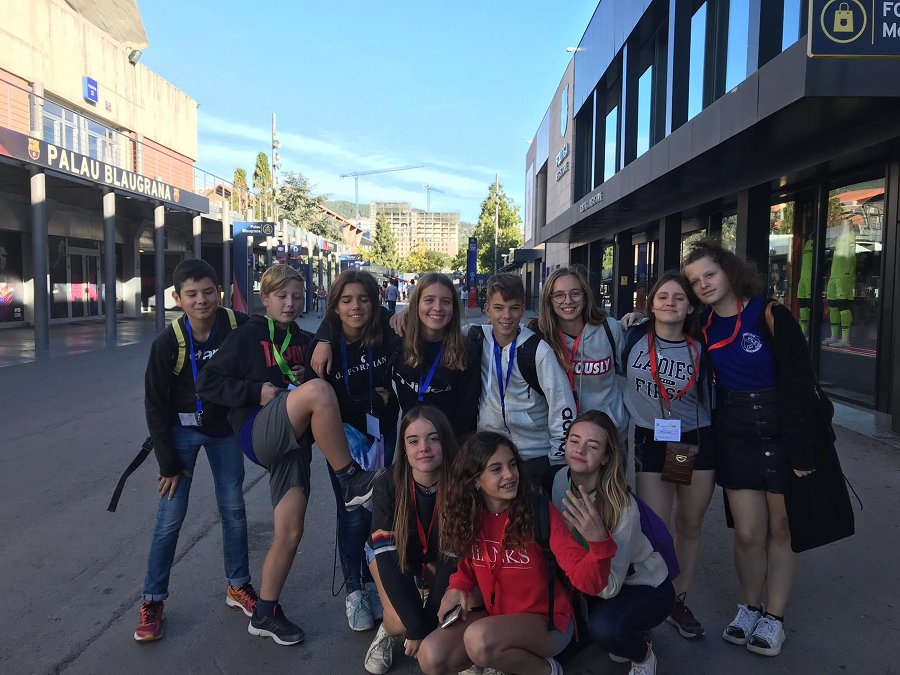 But the most important thing was talking with students. I lived in  Sonia's Family. She showed me Santpedor. I have the best memories from this trip. I want to see all of these people in Poland!!!

A Beautiful Week in Catalonia

In October me, my three friends and two teachers went to Spain. We spent one beautiful week in Santpedor, which I will rememper forever. On Sunday we met our amazing Catalonian hosts. I stayed with Bruna, in her family's house. They were very nice to me and I liked them very much. That day for the first time I had the opportunity to talk to Bruna in person, which I could not wait for!

We went to the city's festival that day in the afternoon. I noticed then that Santpedor is a beautiful old city. I met many interesting people there, including other project participants with their Spanish friends. We were talking in English. It wasn't as hard as I thought! That day was full of excitiment and joy.

During the week we had activities in school. We played different games, had fun and met other students from this school. One day a circus came to us. We could feel like circus performers and, for example, walk on a rope! This day was full of laughter and fun.

We also went on a trip to Barcelona. I was very excited because I had always wanted to visit this city! We went sightsing and I spent a very nice time with my Erasmus friends. 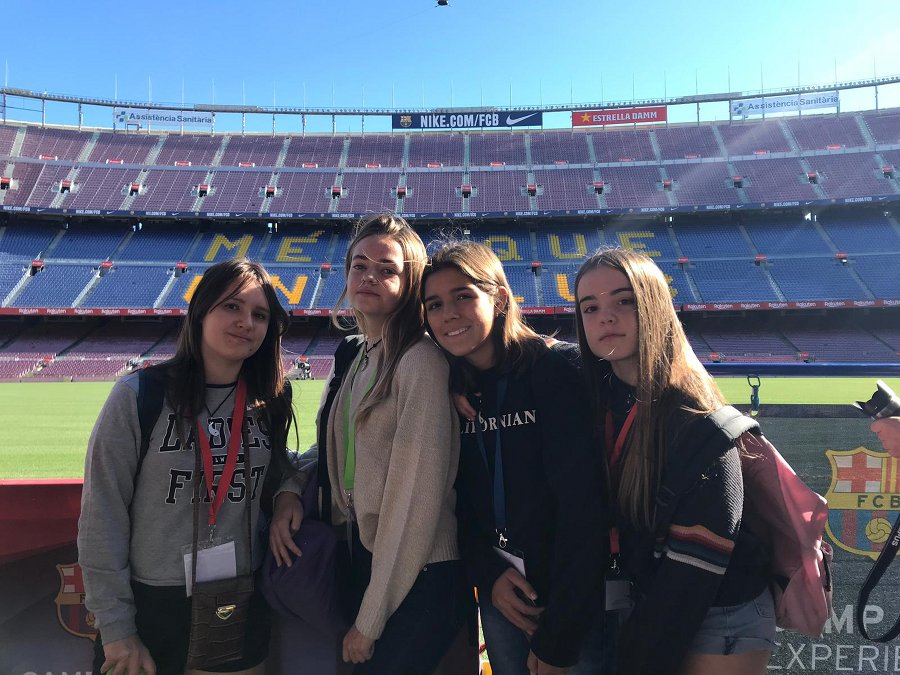 In my opinion the best things were meetings with people from Erasmus+ and their Catalonian hosts. They were amazing! I became very attached to them. We did picnics and we spent time together. I'd really want to see again people who I met there. I hope that someday I will do this!

We were eating local food. It was different than in my country but I liked it. On Friday we had a dinner with all people from Erasmus and all the host families.

I liked very much Bruna, in whose house I lived. She is an amazing and very caring person. We spent together unforgetable moments. I miss her and all the people from Erasmus+ very much! 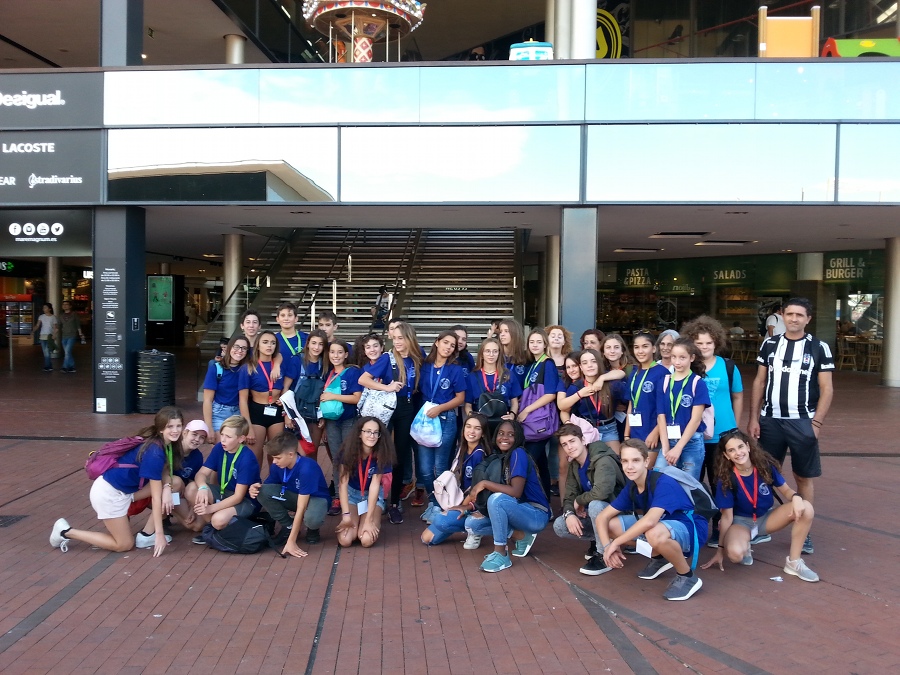 In that week I got to know cultures from other countries - Turkey, Spain, Portugal, Bulgaria, Latvia and Romania. I learnt that we are all similar. We like the same things, read the same books and listen to the same music.

I was really sad when it was finally the time to come back. That week was beautiful and If I could I would like to experience it again.

My five days in Bulgaria were incredible. First, I felt that I grew very much on the level of maturity and even as a person. I learned to respect others more with their differences. To live a week with a family that isn’t ours, in a foreign place is the same kind of challenge. I felt that Bulgaria, as Portugal, has some economic and financial problems, I saw that in school or in the streets. The culture, language, way of life and the gastronomy is radically different from ours. To conclude, my experience with the two wonderful teachers who accompanied me with my Portuguese colleague and with all the Bulgarian students and teachers was fantastic. 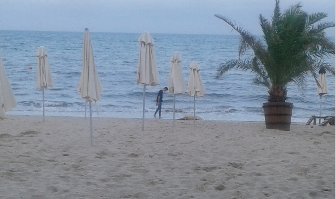 Thank you all especially to the family who had to care of me.

When I was told that I had been chosen to go to Bulgaria I was super happy. I had already received a student from Bulgaria and I was so lucky that I had opportunity to stay at her home when I went to there. I loved all the experience they provided, school, families and pupils. I loved the country, the culture, the language, the population. What I least liked was the food itself but that was over. But I liked the beach, the day at park but the most important were the friends that I had made. In the future I will always remember this week and if I have another opportunity to go to there I will go. 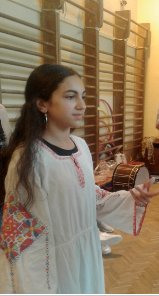 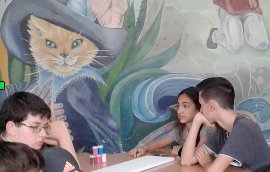 I want to thank the school and especially to Aleksandra and her family who made me happy for a week.

Communication Is the Key in Bulgaria